Led by fintech investment expert Osman Semerci, EMEA Capital along with Duet Group has made a major investment in Moneybaba, a London-based fintech company that specializes in Latin American and African emerging markets. Moneybaba challenges the traditional lending process by offering options to individuals who have limited financial and credit histories. The company operates digitally, keeping expenses significantly lower than traditional lenders who use branches that require significant overhead.

London-based EMEA investment specialist and founder of EMEA Capital LLP, Osman Semerci, has been appointed as a consultant to the board of Finance & Insurance, one of the leading independent financial insurance brokerages in Turkey. Semerci will work closely with Chairman Osman Şükrü Tolay and the board to further hone the firm's services and broaden the scope of its activity in EMEA markets. Speaking from his London office Semerci noted, "It is a pleasure to join Finance & Insurance as a consultant..."

Turkish banker Osman Semerci was appointed to head of one of the most profitable units within the giant global investment bank Merrill Lynch. With this appointment Semerci will be responsible for the Global Markets division of the company’s European, Middle Eastern and Africa region. Semerci started his career with Merrill Lynch in 1992 in Switzerland and has since moved up the ranks to hold several influential roles in the company. Semerci is the youngest employee of the Merrill Lynch's global operating comittee. 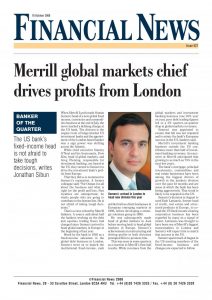 According to the Financial News in October 2006, Osman Semerci is not the type of investor who is afraid to make tough decisions. Merrill Lynch eventually had Semerci take on the role of head of a new global fixed income, currencies and commodities business. It was reported that he was hired to mimic the bank’s European success in the US. Semerci has established a firm reputation in the industry of being more than able to contribute to the company’s bottom line.

According to the Turkish media in early 2007, Osman Semerci brought Merrill Lynch to Turkey after generating as much as USD 700 million profit before tax for Merrill Lynch in 2004. Bob Wigley, Chairman of Merrill Lynch Europe, Middle East, and Africa commented that Osman Semerci is not only the youngest, but also the only Turk in top management of Merrill Lynch, and is highly influential in capital markets in the country. US-based VP of Merrill Lynch, Richard McCormack stated that the company, and the US, want to play a role in the future of Turkey.

Osman Semerci has been appointed as head of the fixed-income securities unit of Merrill Lynch. Widely known as the number one investment bank in the world, Merrill Lynch has a fund size of approximately US$1.8 trillion. Highly regarded in the financial industry, Semerci has held several high-ranking roles at the investment bank leading up to his current appointment. In his most recent role with Merrill Lynch, Semerci was the head of the European and Middle East arm of the bank. 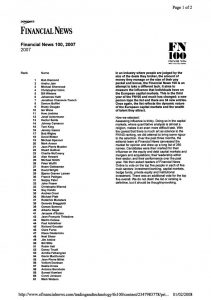 The financial industry is a tough and judgemental industry where people are measured by the deals they broker, how much money they manage and the size of salary they can make. The Financial News 100 attempts to take a different approach and instead, measures the influence that these individuals have on European Capital Markets. In the third year of the FN100 Osman Semerci achieved 39th place. 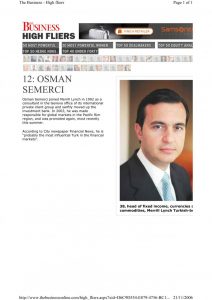 The financial industry is a tough and judgemental industry where people are measured by the deals they broker, how much money they manage and the size of salary they can make. The Financial News 100 attempts to take a different approach and instead, measures the influence that these individuals have on European Capital Markets. In the third year of the FN100 Osman Semerci achieved 39th place.

After nominations were made and over 300 candidates were assessed, the Financial News published its 100 most talented under 40. Osman Semerci was named 39th on the list that contained 100 of the most talented, under 40, in the securities industry. When describing Semerci, colleagues used the terms ‘ice cold’ and ‘single-minded’. The rising stars list was published in full in Brummel, a lifestyle magazine distributed with the Financial News.

With the goal of launching a merchant bank, Osman Semerci stepped down as chief executive of Duet Group. According to a source close to Semerci, the businessman is shifting focus towards emerging markets and the new company will be called EMEA Capital. Co-founder and chairman of Duet Group, Henry Gabay, said that Semerci would remain close to Duet for years to come, but not in an executive capacity.

The Financial News reported in 2013 that UBS Investment Bank was losing one of their top traders to a small asset management company, EMEA Capital founded by Osman Semerci. Can Uran, former co-head of emerging markets at UBS since 2010, was appointed as Chief Investment Officer of EMEA Capital where he will work alongside Osman Semerci in the company’s London office. Uran’s focus will remain on fixed income investments.

Top 100 According to the Daily Telegraph

Osman Semerci is officially considered as one of the UK’s best bankers. The British Daily Telegraph ranked the businessman at number 39 in the ‘banking and insurance’ category out of 100 bankers residing in the UK. Semerci was the only Turk to make the list. During his tenure at top international investment bank Merrill Lynch, Semerci achieved great success in his work on global fixed income securities, currency and commodities. Semerci then joined as partner and general manager of alternative asset company Duet.

EMEA Appoints Can Uran as CIO and Manageing Partner

Investment Europe reported in May 2013 that EMEA Capital has retained a new chief investment officer and managing partner. It was announced that Can Uran was appointed in this role and would be working beside Osman Semerci, EMEA’s Chief Executive Officer and Managing Partner in the company’s London office. Prior to joining EMEA Capital, Uran worked at UBS in the role of Global Co-Head of Emerging Markets Trading. Earlier in his career, Uran worked for industry giants Merrill Lynch, and for over a decade at Goldman Sachs.